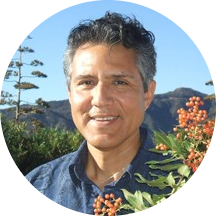 Rich is a lifetime southern California resident and a cinematic Production Designer and most recently designed DEAD TO ME, RESERVATION DOGS, and WINNING TIME. He has multiple Emmy and Art Directors Guild nominations and awards in each. Rich is active in his professional guild (Art Directors) and holds numerous guild positions. He guest lectures at UCLA, USC, and CSUN but is passionate about mentoring disadvantaged youth considering careers in cinema.

Originally trained in architecture and landscape architecture from Cal Poly SLO he later specialized in urban adaptive architecture and urban native landscapes such as Skid Row Park, Hollywood Bowl, Getty Villa, MOCA, and numerous commercial and residential projects. While at university Rich was a certified wildland firefighter Hotshot and backcountry ranger for the USFS and a FCC licensed on-air discjockey for several radio stations in San Luis Obispo and Santa Barbara.

Rich derives from the Acjachemen Nation though is active with Gabrielino/Tongva San Gabriel Band of Mission Indians and was responsible for the naming of Tongva Peak in the Verdugo Mountains and actively liaisons for the tribe. He authored the Verdugo Wash Sustainability project and responds to EIRs and regularly lectures on Tongva tribal history.