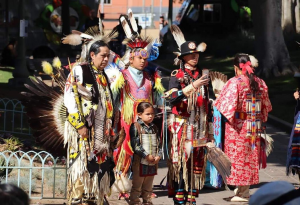 – a time to not only celebrate the richly diverse Native American heritage, but learn about the many tribes of the Los Angeles County basin, namely its first peoples – the Tongva, Fernandeño Tataviam and Ventureño Chumash as well as the urban population that comprise members of more than 200 tribes.

Earlier this month, the Los Angeles County Board of Supervisors honored three community members for their numerous contributions to the Native American community. We were happy to join LA County Board Supervisors Janice Hahn and Hilda Solis in recognition of Native American Heritage Month and our 3 honorees. The honorees – Saginaw Grant (Sac and Fox Nation), Randy Reinholz (Choctaw) and Omerlene Thompson (Gila River) – were recognized for their spirit of tradition, spirit of creativity and spirit of community. 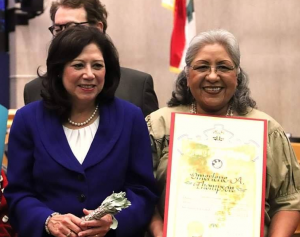 Thompson, an enrolled member of Akimel O’otham (Gila River), has worked for the United American Indian Involvement for more than 36 years, providing critical social services to the Native American community, including homeless Native Americans on downtowns Skid Row. She has served multiple generations of families by helping them succeed at school and work. Reinholz, a member of the Choctaw Nations of Oklahoma, was recognized for the contributions to the Native American Indian community through theater arts, giving prominence of place and voice to Indigenous artists. He is the co-founder and Artistic Director of Native Voices at the Autry Museum, and has directed over 50 plays in the United States, Australia, England and Canada. Grant, a Hereditary Chief and member of the Sac and Fox, Iowa and Otoe-Missouria Nations, is a veteran of the Korean War and U.S. Marine Corp. As a Southern California resident, Grant is called upon for counseling, mentoring, lectures and family events while pursuing an acting career. His latest short film, “Beautiful Dead Things” won several awards at various film festivals. 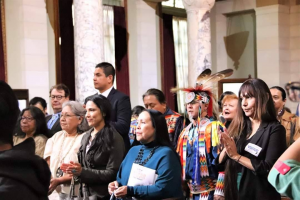 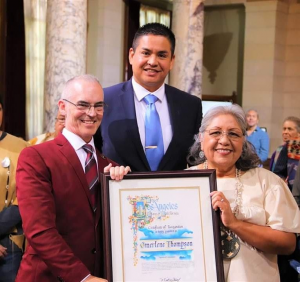 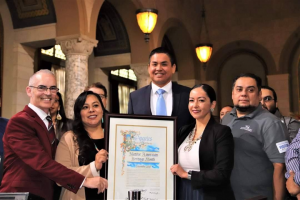 On November 1st, the honorees were recognized during our celebration at LA City Hall Council Chambers and thanked for positively impacting our community.