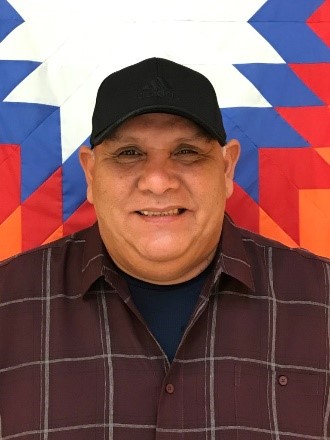 Keith Vielle is from the Blackfeet Nation of Montana. Keith has served the Los Angeles’s American Indian and Alaska Native community for many decades. An employee of the Los Angeles County Department of Mental Health for over 13 years, Keith has provided invaluable services for the American Indian Counseling Center as a substance abuse counselor. He previously served as Co-Chair for the Department of Mental Health American Indian and Alaska Native Underserved Cultural Committee. Keith is a United States Army Veteran and is a member of the Native American Veteran’s Association and an Honor Guard member. He also volunteers as a certified archery coach and summer camp mentor for the American Indian Clubhouse, a program that provides services that enhance the growth and well-bring of American Indian youth in Los Angeles in a manner that is respectful to cultural and tribal values. Keith has had a personal and professional relationship with United American Indian Involvement, Inc. for over 20 years. He also most recently joined United American Indian Involvement’s Board of Directors.

While Keith’s numerous professional accolades are of note it is his character and commitment to his community that set him apart. Widely known for always going above and beyond the call of service, Keith acts when no one is watching, gives genuinely and with humility, and helps those who need it most. Julia Bogany is a member of the Tongva tribe. She serves on the Tongva Tribal Council and she is also a Cultural Consultant for the tribe. Julia gives generously of her time and knowledge and is always busy helping others, whether it is volunteering, teaching, attending meetings or serving on Boards. She is always open to opportunities to represent her Tongva people, and the greater LA Community at large. She has worked for over thirty years with the American Indian community for her Tongva tribe. She has also led cultural, Tongva language, Fetal Alcohol Spectrum Disorder, Indian Child Welfare Act (ICWA) trainings and workshops throughout Southern California.

Julia has helped to reawaken and revive the Tongva language, as well as assemble a Tongva dictionary. She is Vice President of the Keepers of Indigenous Ways (KIW), a non-profit group of the Tongva. She also teaches basket weaving, where she uses this artistic skill to teach math to youth. She is President of Residential Motivators, her own non-profit consulting firm.

She serves on several committees and organizations, including Community Health Worker for Mental Health, California Indian Education Association, Children Court L.A. Round Table for ICWA, and runs co-ed and women’s circles. She is President of Kuruvanga Springs, a Representative for California tribes on Route 66, a member of the California Native American College board, and Pitzer College Elder in Residence. She teaches Native culture and history and Women’s issues at Scripps, Pomona, Harvey Mudd, and the Claremont School of Theology, in addition to Pitzer. She works one-on-one with students to develop their thesis, and she also assists with the summer Native Youth to College program.

In September 2010, Julia received the Heritage Award from the Aquarium of the Pacific at their sixth annual Native American festival, Moompetam. She has also been nominated for Coastal Commission for the State of California and is a Stake Holder Consultant of 200 parks in Los Angeles County.

Ms. Bogany consults with and trains teachers and school boards on how to revise their curriculum to reflect the correct history of California and California tribes. She wants to change the future for her tribe and future generations; this is her way of giving back. A great grandmother, she teaches them arts, crafts, language, and culture. All the work she has done is for their future and for the future of her Tongva tribe. Bird Runningwater belongs to the Cheyenne and Mescalero Apache Tribal Nations. He grew up on the Mescalero Apache Reservation in New Mexico. Since 2001, Bird has guided the Sundance Institute’s investment in Native American and Indigenous filmmakers while building a global Indigenous film community. He has nurtured a new generation of filmmakers whose films have put Indigenous Cinema into the global marketplace. Now based in Los Angeles, California, Bird serves as the Director of Sundance Institute’s Indigenous Program and its Diversity, Equity Inclusion work across the organization. Under his tenure, 140 Indigenous filmmakers have been mentored and supported through Labs, Grants, and Fellowships. More than 110 films written, directed, and produced by Indigenous filmmakers have been curated by Bird to premiere at the Sundance Film Festival; as a result, over the past 10 years alone the Sundance Institute has welcomed artists representing more than 90 different Indigenous nations from around the world. Indigenous artists he has supported to get their work made and seen include Sterlin Harjo (Seminole/Muskogee Creek Nations), Rachel Perkins (Arrernte/Kalkadoon Nations); Taika Waititi (Te Whānau-ā-Apanui); Andrew Okpeaha MacLean (Iñupiaq); Warwick Thornton (Kaytej Nation); Aurora Guerrero (Xicana); Sydney Freeland (Diné); Ciara Leinaʻala Lacy (Kanaka Maoli); Lyle Mitchell Corbine, Jr. (Bad River Band of the Lake Superior Tribe of Chippewa Indians); Sky Hopinka (Ho-Chunk/Pechanga); Amanda Kernell (Sámi) Shaandiin Tome (Diné); Elle Maija TailFeathers (Blackfoot/Sámi); Ainsley Gardiner (Te Whānau-ā-Apanui/Ngāti Pikiao/ Ngāti Awa); Briar Grace Smith (Nga Puhi); Yolanda Cruz (Chatino); And, Danis Goulet (Cree/Metis), among many others.

Highly sought after for his expertise and knowledge, Bird has led workshops and been featured on panels ranging from the Sundance Film Festival’s “From Oral Tradition to the Screen: Indigenous Screenwriting” to “A Conversation with Merata Mita” at the MessageSticks Festival held at the Sydney Opera House in Australia. He was a panelist at the Raising Voices Conference, hosted by the Hubert Bals Fund at the Rotterdam Film Festival in the Netherlands, exploring training programs that will stimulate the next generation of culturally distinctive and authentic filmmaking voices; And, he has been featured as the Opening Keynote Speaker at the Indigenous Film Conference hosted by the International Sámi Film Centre in Kautokeino, Norway. Bird currently serves on the Comcast/NBCUniversal Joint Diversity Council, the Boards of Directors of First Peoples Fund, Illuminative, and the Arctic Indigenous Film Fund. He is a past member of the Board of Jurors for the George Foster Peabody Awards.

A graduate of the University of Oklahoma with degrees in Journalism and Native American Studies, Bird received his Master of Public Affairs degree from the University of Texas at Austin’s Lyndon B. Johnson School of Public Affairs. He was named by Time Magazine as one of “12 Leaders Who Are Shaping the Next Generation of Artists.” Most recently, he was invited to become a member of the Academy of Motion Pictures Arts and Sciences, the organization behind the Oscars. He is currently serving as the Co-Executive Producer of the TV show “Sovereign” which is in development with NBC, Warner Brothers Television, and Ava DuVernay’s Array Filmworks; the show may be the first Native American family drama on network television.